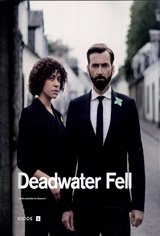 In this four-part mini-series, Jess (Cush Jumbo) and Steve (Matthew McNulty) are good friends with their neighbors, Tom (David Tennant) and Kate Kendrick (Anna Madeley), who have three beautiful and bright little girls.

When a fire breaks out one night at the Kendrick home, Steve, Jess and several other neighbors rush to get the Kendricks out of the house. Steve climbs up a ladder and discovers a lock on the girls' bedroom. The door won't open, but Steve finds Kate passed out in the hallway and manages to carry her down, then discovers Tom in the bedroom and gets him out.

It's determined that Kate is dead, but Tom is taken to hospital, where he's in serious but stable condition. The police discover the fire was deliberately set in the kitchen. Now they need to determine who tried to kill the family. Was it Kate, who suffered from depression? Or Tom, who has a cruel streak, despite being a medical doctor?