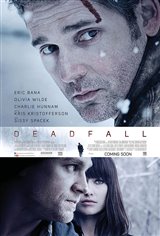 Siblings Addison (Eric Bana) and Liza (Olivia Wilde) find themselves on the run after a casino heist gone wrong. When a car accident leaves their wheel man and a state trooper dead, they split up and make a run for the Canadian border in the worst of circumstances—a near whiteout blizzard.

Addison heads cross-country, leaving behind him a trail of blood. Meanwhile, Liza is picked up by ex-boxer Jay (Charlie Hunnam), who is en-route to spend Thanksgiving with his parents June (Sissy Spacek) and retired sheriff Chet (Kris Kristofferson). Jay is running away from problems of his own but when he finds Liza in the middle of the road, he takes her along.

It's at Jay's parents' house that the siblings are finally reunited. It isn't a happy reunion but instead, a terse and thrilling showdown that pushes the bonds of family to the limit.