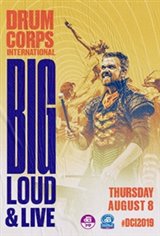 Fathom Events and Drum Corps International bring the Marching Music's Major League? to the big screen for an exclusive one-night event. Get your front-row seats to the DCI World Championship Prelims LIVE from Lucas Oil Stadium in Indianapolis, IN when Big, Loud & Live returns to cinemas.

Catch all the action as 15 of DCI's top performing corps battle it out for the chance to be named the 2019 DCI World Champion!