David Foster: Off the Record 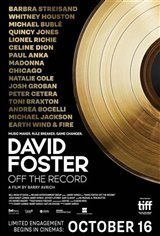 Foster has helped sell more than a half-billion records and has collaborated with artists such as Chicago, Barbra Streisand, and Andrea Bocelli. He is also credited with discovering and working with Michael Bublé and Josh Groban. He helped introduce Céline Dion, who was a huge star in Quebec from the age of 12, to the English-speaking world in her early twenties, raising her profile to new heights.