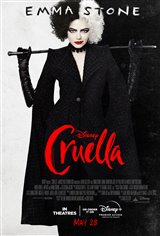 A live-action prequel feature film that tells the story of a young Cruella de Vil, the villain from 101 Dalmatians.

In 1970s London, a young grifter named Estella (Emma Stone) aims to leave her mark on the fashion world amidst the backdrop of the punk rock revolution. Befriending a pair of thieves who share her predilection for mischief, the trio establish a life for themselves in London.

With their help and her creativity and wit, Estella catches the eye of fashion legend Baroness von Hellman (Emma Thompson) through her fiery flair. As von Hellman takes Estella under her wing, their relationship sends Estella down a dark path in embracing her cruel and wicked side and transforming her into the revenge-bent Cruella.