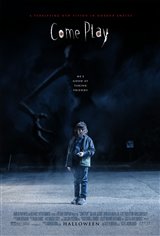 Desperate for a friend, a non-verbal autistic boy named Oliver (Azhy Robertson) is constantly on his cell phone and tablet, even in school, where the other kids aren't allowed to be on their devices. An app on Oliver's phone keeps opening and telling a scary story about a creature named Larry, who just wants to be his friend.

When Larry appears on his tablet at home, the entity breaks through into the house, frightening the little boy. Using the app on his tablet that allows him to choose words to express himself, Oliver tries to tell his parents, Sarah (Gillian Jacobs) and Marty (John Gallagher Jr.), but they reassure him that there's no one in the house.

However, when Oliver holds his tablet up and points it in the direction of where he hears a noise, he can see Larry. When his parents finally realize Oliver is telling the truth, they realize they have to save their son from the monster who appears only through the screen.