Cinematheque at Home: The Booksellers 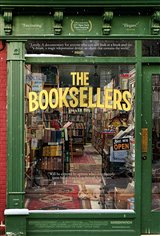 Antiquarian booksellers are part scholar, part detective and part businessperson, they also play an under-appreciated yet essential role in preserving history. This riveting small but fascinating world populated by an assortment of obsessives, intellects, eccentrics and dreamers.

Featuring interviews with some of the most important dealers as well as prominent collectors, auctioneers, and writers such as Fran Lebowitz, Susan Orlean, Kevin Young and Gay Talese. Both a loving celebration of book culture and a serious exploration of the future of the book, the film also examines technology’s impact on the trade, the importance of books as physical objects, the decline of used and rare bookstores, collecting obsessions, and the relentless hunt for the next great find.

And perhaps best of all, The Booksellers offers a rare glimpse of many unique and remarkable objects, including the most expensive book ever sold, Da Vinci’s The Codex Leicester; handwritten Borges manuscripts; jewelled bindings; books bound in human flesh; essential early hip-hop documents; accounts of polar expeditions published with samples of real wooly mammoth fur; and many more.

RON ROBINSON learned his bookselling trade at Eaton’s and then was a founding partner of McNally Robinson Booksellers.  He has made several book pilgrimages including Foyle’s in London, Hay on Wye in England, and the Strand in New York and says “I never visit a new city or town without researching the used bookstores first.I remember Hall’s used bookstore on Portage Avenue as Aladdin’s cave and Harold’s on Princess as a place to add to my Famous Monsters of Filmland magazine collection…”

AIMEE PEAKE has been active in the antiquarian book business for over 20 years. She apprenticed to Michael Park, proprietor of one of Canada’s premier Antiquarian bookstores, Greenfield Books. After several years of part-time tutelage, in 2001 she undertook management of the newly-opened Bison Books.and became a partner in 2007 and assuming sole proprietorship in 2010.In 2018, Aimee purchased Greenfield Books. She moved the contents into Bison Books and endeavours to do justice to the standards of professionalism set by her mentor.

BILL FUGLER grew up frequenting second hand bookstores in Montreal, Page 2 located in an alley atop a rickety fire escape, Black Cat books, behind the fishing supply shop in the Pointe Claire Village. At 14 he started working after school at Econo after school at Econo Livres in Beaconsfield and for several years would make a pilgrimage to The Strand in New York. He went on to open The Neighbourhood Bookstore and Cafe in Wolseley which he ran for 13 years. He’s currently a writer and a teacher and missing the dusty pages.

Cinematheque at Home – curated by the Cinematheque – will offer new theatrical releases to our audience every week through Vimeo on Demand. Cinematheque at Home will offer new programs (individual feature films and/or shorts programs) each week, which our audiences can pay to stream through our website. This is not only an opportunity for our patrons to see new cinema, but is an important way that they can continue to support independent film during this pandemic.