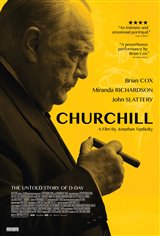 The untold story of Britain’s most celebrated leader, Winston Churchill, and his indefatigable efforts to save Britain from the Nazis and free Nazi-occupied Europe.

It's June 1944 and Churchill is fearful of repeating the mass slaughter of 1915, when hundreds of thousands of young men were cut down on the beaches of Gallipoli. With Allied Forces on the brink and a massive army secretly assembled to take down the Nazis, Churchill is terrified their efforts will not be successful.

Only the support of Churchill’s brilliant wife Clementine – his backbone and confidant, can the Prime Minister find the strength and courage to do what is needed.