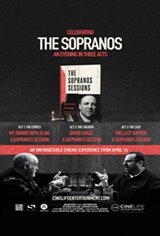 An unforgettable event for Sopranos fans.

Split into three unique sessions, directed by Kristian Fraga, this special event provides an insight from the Creator, the Critics and the Cast about this epic, multi award-winning series that screened over seven seasons, eighty six episodes and is still regularly cited as being one of the best television series of all time.