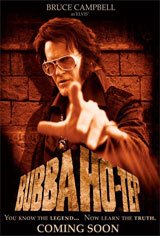 Watch Trailer
Elvis Presley (Bruce Campbell) is an elderly resident in an East Texas retirement home, having switched identities with an Elvis impersonator years before his "death," then missed his chance to switch back. Elvis teams up with Jack (Ossie Davis), a fellow nursing home resident who thinks that he is actually President John F. Kennedy, and the two valiant old codgers sally forth to battle an evil Egyptian entity who has chosen their long-term care facility as his happy hunting grounds.