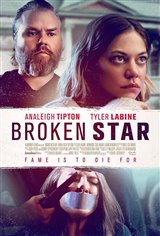 Broken Star follows the chaotic downward spiral of actress Markey Marlowe (Analeigh Tipton). Markey is placed on a 30-day house arrest due to multiple encounters with the law. As she settles down, she becomes unbearably depressed and abuses prescription drugs. She eventually comes to the realization that she craves attention more than anything else, and that her existence is meaningless without fame. She watches old videos of Marilyn Monroe and believes herself to be akin to the famous starlet.

Her landlord Daryl (Tyler Labine) is clearly infatuated with Markey, and her only point of contact. He takes photographs of her and tells the actress she is beautiful. Markey quickly realizes she can exploit Daryl's feelings to achieve everlasting fame. She conceives a plan that requires Daryl to leave the home and commit a series of crimes. At the same time, Markey begins a disturbing physical and psychological metamorphosis into a starlet who will certainly be remembered.