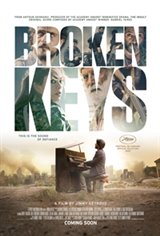 Broken Keys tells the story of Karim, a musician who struggles to rebuild his piano after it is destroyed by extremists while trying to escape his war-ravaged Middle Eastern neighborhood where music has been banned.Through the noble and transcendental power of music, Broken Keys explores matters of survival, resistance, defiance, sacrifice, and hope against the backdrop of a conflict-ravaged Middle Eastern neighborhood.