Bring it On: Worldwide #Cheersmack 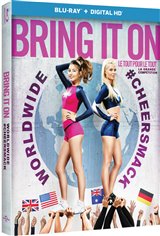 Destiny (Christine Prosperi) is the captain of three-time national champions "The Rebels," but everyone wants to challenge her amazing team, including an edgy new team called "The Truth." The Cheer Goddess (Vivica A. Fox) organizes a virtual battle involving over 20 teams from 12 countries at a competition known as "The Smackdown."

It seems like the whole world wants to take down Destiny and her team, and they just might succeed, unless Destiny can rise to the challenge, set her ego aside and figure out who her real friends are.