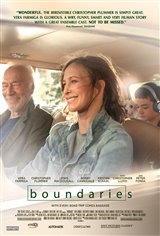 Single mother Laura (Vera Farmiga) and her 14-year-old son Henry (Lewis MacDougall) are tasked with transporting her estranged father Jack (Christopher Plummer) across the country after his pot-dealing results in him being kicked out of another nursing home.

Although their relationship is strained, Laura agrees to drive Jack, unaware that he has stashed $200,000 worth of weed in the trunk of their car.

During their cross-country journey, Jack orchestrates a number of unplanned stops and reunites with his old friends while also continuing to deal his stash of pot. Henry begins to form a close bond with Jack, and requests that they make another stop so he can see his own estranged father, Leonard (Bobby Cannavale).