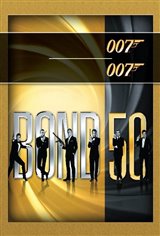 This Blu-ray box set includes all 22 James Bond films together for the first time. It also includes over 100 hours of bonus features, such as never-before-seen content from the 007 archives, videoblogs with the cast and crew, commentaries, behind-the-scenes shots of each film, interviews with the actors who played Bond over the years, music videos and much more.

The collection also contains two pieces spotlighting the history of the iconic franchise. The World of Bond looks at the signature style and attitude of 007 by pulling together the cars, women, villains and music of the past 50 years. Being Bond profiles the six actors who have had the honor of taking on the prolific role, from Sean Connery in 1962 to Daniel Craig in 2006.