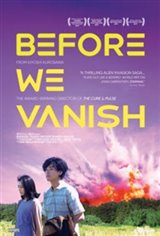 Akira, a teenage schoolgirl living in a quiet suburb in Japan, has vanished after viciously slaughtering her entire family.

A journalist named Sakurai (Hiroki Hasegawa) come across the scene and is approached by a young man named Amano (Mahiro Takasugi). He wants to team up to search for Akira. Sakurai agrees, but doesn't realize that Amano is one of three aliens who have traveled to Earth in preparation for a mass invasion, during which the aliens will take possession of human bodies.

Based on the play by Tomohiro Maekawa. In Japanese with English subtitles.