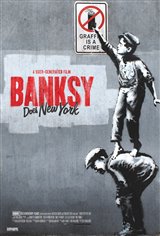 Banksy, an infamous, anonymous British street artist moved to New York City for a month, and posted one unique exhibit a day in an announced location, sparking a 31-day scavenger hunt (starting Oct. 1, 2013) for his work.

He left cryptic clues on his website and New Yorkers ventured out to search for artworks that spanned all five boroughs, often travelling to parts of the city they had never been to before. Adding to the thrill of the chase, was not knowing exactly what they would find.

Many pieces were vandalized, tagged, painted over, removed or stolen. But when a discovery was made, New Yorkers got involved (photographing, posing, posting), thus becoming part of the artwork itself.

Mocking the hypocrisy of modern art works, Banksy hired a man to sell unmarked Banksy drawings in Central Park for $60 each and made $420 in total. Each piece now has a worth of about $250,000.