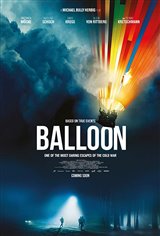 From the mid-1970s to the late 1980s, nearly 38,000 East Germans attempted to escape to West Germany. Of those, 462 were killed. On September 16, 1979, two families—the Wetzels and the Strelzyks—braved the danger of crossing the border in a homemade hot air balloon they’d been secretly building over the course of 18 months. Their extremely risky plan was complicated by curious neighbors, inferior materials and unpredictable weather.