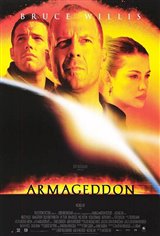 It is a seemingly normal day at NASA. Some astronauts are repairing a satellite. Soon after, a meteor shower comes out of nowhere. It destroys the satellite and also hits and destroys all of New York City. NASA discovers a Texas-sized asteroid barreling towards Earth. If this asteroid is not stopped, all of Earth’s inhabitants will be killed off, just like the dinosaurs.

NASA hires a group of oil drillers led by Harry Stamper (Bruce Willis). They're sent off into deep space to implant a thermonuclear device within the asteroid - hopefully diverting it from a collision course with their home planet.