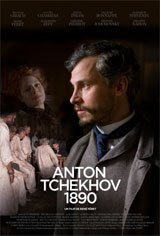 Russia, 1890. To support his family, Anton Chekhov, a doctor of modest means, supplements his income by writing short newspaper articles under the pseudonym Antosha Chekhonte. Noticed by famous novelist Dmitry Grigorovich and influential editor Aleksey Suvorin, the young man is encouraged to use his literary talent in order to land a publishing contract. A workaholic, Anton produces several texts, which are well received by the public.

Lika, a fervent admirer of his work, seduces him and becomes his lover, despite the fact that she’s married. Anton goes on to hire his sister Masha as his assistant and his brother Kolya as an illustrator. But when Kolya dies of tuberculosis, Anton fulfills the promise he had made to him to go to the island of Sakhalin in far-off Siberia, to describe the conditions under which the convicts there live. During his three-month stay, the writer falls under the spell of a teacher who inspires him.