Ant-Man and The Wasp: Quantumania 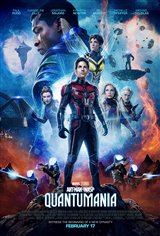 Kang tells Scott he can rewrite time, so that Scott can spend time that he missed with Cassie as she was growing up. Scott wants to know more, but Janet warns him that Kang is dangerous. There's something he wants from Scott and if he doesn't get it, all life will end.