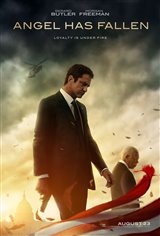 During an assigned fishing trip with President Allan Trumbull (Morgan Freeman), Mike Banning (Gerard Butler) is promoted to Director of the Secret Service. During the same fishing trip, drones suddenly appear in the sky, dropping bombs on the security detail on shore. Banning saves Trumbull's life by telling him to dive deep into the water, before the boat he's on is blown up.

The news quickly leaks to the media that an assassination attempt has been made on the President of the United States. Banning winds up in the hospital, where he's handcuffed and told he's under arrest for orchestrating the attempt. Unable to convince anyone that he's being set up, Banning goes on the run to prove his innocence. He tracks down his reclusive father (Nick Nolte) to ask for help in his mission to find the real culprits behind the assassination attempt and to save Trumbull from them.