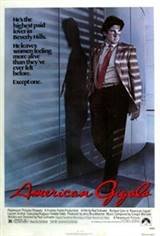 A slick Los Angeles callboy finds love and redemption in Paul Schrader's ultra-stylish drama. High-living prostitute Julian Kay (Richard Gere, stepping in for John Travolta) has it all: the Mercedes, the clothes, access to Beverly Hills' swankiest establishments, and a stable of rich, older female clients.

But it all falls apart after he does a favor for his former pimp (Bill Duke) and the trick turns up dead a short while later; Julian's actual client won't give him an alibi, and police detective Sunday (Hector Elizondo) doesn't believe the gigolo's denials.

The one person who can help him is frustrated politician's wife (and sole non-paying bedmate) Michelle (Lauren Hutton), if only Julian could let down his defenses and accept her gesture of love.

Mixing his admiration for European art cinema with a voyeuristic view of the seamier side of sex and affluence, Schrader renders Julian an inscrutable, emotionally disengaged purveyor of pleasure, decked out in Giorgio Armani clothes coordinated with Ferdinando Scarfiotti's meticulous production design.

Amid critical doubts about its artiness and distanced eroticism, American Gigolo surprised everyone by not dying on the box office vine. With some audiences reportedly showing up for repeat viewings of Gere's seductive charms, it became a moderate hit, turning Gere into a star and Armani into the new fashion sensation.

Whatever reservations one may have about the movie, it provided two indelible images of 1980s decadence to come: Gere's perusing his artist's palette of shirts, ties, and jackets, and Gere's cruising down the Pacific Coast Highway in his convertible to the New Wave strains of Blondie's Call Me.