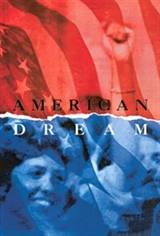 Depicting the effects of a mid-1980s strike by the employees of a Hormel meat-packing plant in Austin, Minnesota, Barbara Kopple's Academy Award-winning documentary American Dream observes both the daily struggles of the striking workers and the behind-the-scenes conflicts amongst the union leaders.

Upset at a proposed pay cut, the local union chapter begins the strike against the advice of their parent organization, hiring an outside consultant who encourages the workers. This consultant's aggressive, no-compromise approach turns the conflict into national news but also alienates management.

Soon, despite the efforts of a seasoned negotiator sent by the parent union, the company has locked out the workers and hired scabs, leading to a series of violent conflicts amongst members of the community.

The workers' resolve progressively fades as the battle extends into months and years, and the financial hardships they and their families suffer leads some to doubt the value of their efforts.

Kopple, who had previously covered an extended miner's strike in the acclaimed 1977 documentary Harlan County, USA, focuses on the personalities and emotions behind the strike, creating a highly charged portrait of labor that is sympathetic to the workers' distress without ignoring the strike's greater ambiguities.