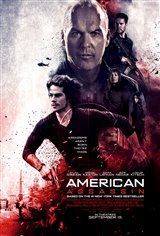 When Mitch Rapp (Dylan O'Brien) was 14, his parents were killed in a fiery car crash. Life became difficult for him at that point. He began to develop behavioral problems and was kicked out of three boarding schools.

Just as Mitch finally has his life together, he asks his girlfriend to marry him at a beautiful beach resort. Suddenly the beach is flooded with armed men, shooting everyone in sight, including his girlfriend. Mitch survives, but once again, he's lost everything. He decides to join a new group of clandestine operatives formed by the CIA to combat Islamic terrorism.

Mitch wants only one thing — retribution, making him an ideal candidate.

Based on the bestselling novel by author Vince Flynn.