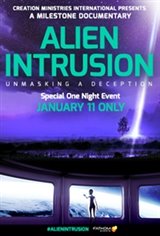 Millions of people have seen UFOs and many even recall personal encounters with strange entities.

From Fathom Events and Creation Ministries International, "Alien Intrusion" dives into the spiritual realm of these phenomena - in cinemas nationwide for a special one-night event on January 11, 2018. Featuring interviews with experiencers, as well as experts and major influencers in the field, this documentary examines the UFO phenomenon. "Alien Intrusion" seeks to solve one of the most haunting and persistent mysteries of our time by addressing the evolution connection to UFOs such as: UFOs sighted across the globe, alien abductions, potential government cover-ups, and more.