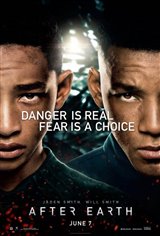 Approximately 1,000 years after humans were forced to leave Earth due to cataclysmic events, teenager Kitai Raige (Jaden Smith) and his father Cypher (Will Smith) crash land on Earth's surface.

With Cypher critically injured in the crash, Kitai sets off on a dangerous journey to signal for help. Along the way he faces uncharted terrain, evolved animal species that now rule the planet, and an unstoppable alien creature that escaped during the crash.