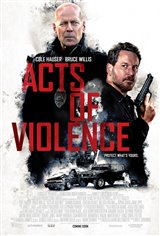 When Roman MacGregor's fiancée Mia is kidnapped by human traffickers while out on a night on the town with her girlfriends, Roman and his ex-soldier brothers Brandon (Shawn Ashmore) and Deklan (Cole Hauser) decide to find her themselves.

Armed, they raid a den run by human-trafficking kingpin Max (Mike Epps), where they find drugs and other women being held captive, but no Mia. This attracts the attention of Cleveland Police Detectives James Avery (Bruce Willis) and Baker (Sophia Bush), who’ve been trying for two years to get enough evidence to lock Max up.

Just as Avery convinces the McGregors to let the police do their job, Avery is taken off the case when the FBI takes over. He agrees to turn a blind eye for 24 hours to allow the McGregors to find Mia.