A Sense of Humour 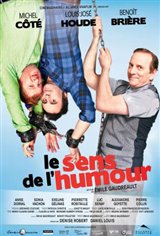 Luke and Marco are two b-list stand up comedians who tour across Québec playing to small town crowds. Part of their shtick every night is to pick a victim and make fun of him, much to the audience's delight. At Anse-au-Pic, a remote community which borders the Saguenay region, they choose Roger Gendron, a bashful cook who flips burgers at the local diner.

The following day, our two comedians wake up to find themselves locked in a cage, at the mercy of the above-mentioned Mr. Gendron, who is hell-bent on getting his revenge. Luke and Marco make Roger an offer: they will teach him the fine art of comedy and make him the biggest star at Anse-au-Pic, in exchange for their freedom. Roger accepts, the two are ecstatic, but they have no idea what an enormous task lies ahead of them.