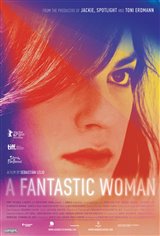 Marina (Daniela Vega), a young transgender waitress who moonlights as a nightclub singer, falls in love with Orlando (Francisco Reyes), a divorced man who is a few decades older. As they plan for their future together, Orlando suddenly falls ill and dies.

Marina is forced to confront his ex-wife, who doesn't want anything to do with Marina and asks her not to come to the funeral. Over the next few days, as Marina tries to get things in order, she has to endure insults and slurs from the police and Orlando's family members.