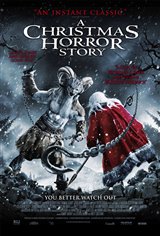 After viewing a horrifying police video in which a cop does a walk-through of a crime scene of two teens who were murdered on Christmas Eve in a school basement, three teenagers plan to sneak into the basement and to get new footage of the crime scene for a school project. Molly, who wants to be a TV reporter, cameraman Dylan and sound guy Ben go into the basement of St. Joseph's Academy, which used to be part of a convent.

Caprice Bauer, who stole the keys to get Molly and the others into the school, goes with her family to visit an elderly aunt. After arriving at Aunt Edda’s imposing mansion, Caprice's little brother Duncan purposely drops and breaks a figurine of Krampus – an act that the frightening handyman warns will have serious consequences. Krampus is a mythological demon said to be the anti-Santa Claus who hunts down the wicked. Aunt Edda is horrified when she sees the broken remains of the figurine and orders the Bauers to leave immediately. Tonight isn’t just Christmas Eve... it’s also Krampusnacht, the time when Krampus gives naughty people what they deserve.

Meanwhile, Scott, the cop in the video, has been on stress leave since last year because of what he saw in the basement. He goes into the woods with his wife and seven-year-old son, Will, to get a Christmas tree. On the way back with the tree, Will goes missing. His parents search frantically and finally Will emerges from the hollow of an ominous, dead tree. His parents are relieved, but they soon realize something about Will is not quite... right.