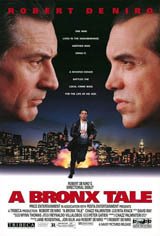 Calogero (Lillo Brancato) was just a child when he bore witness to a brutal mafia hit in the Bronx. In exchange for his silence, mob boss Sonny (Chazz Palminteri) takes the boy under his wing, much to the disappointment of his straight and narrow father (Robert De Niro). As Calogero grows up, he finds himself torn between his admiration for his father's honest live-by-the-law values and the fascinating mob world of Sonny and his crew. To make matters worse, Calogero has fallen in love with a local African-American girl, fueling a violent and deadly racial rivalry. The film, originally released in 1993, is Oscar-winner Robert De Niro's directorial debut.