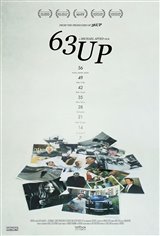 Back in 1964, a British project now known as the Up series, brought together a group of 14 British seven-year-old girls and boys. Directed by Michael Apted, this documentary series has followed their lives every seven years, revisiting their dreams, ambitions and fears for the future.

Now in their early 60s, the group of men and women share their experiences growing up in different socioeconomic backgrounds, as they explore the ever-changing world around them. This moving project series highlights the losses and gains of aging and mortality now that the participants have turned 63, demonstrating how far they have come, and how far they still have to go.