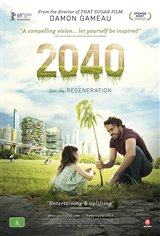 What would the world look like in 2040? That’s what award-winning director Damon Gameau (That Sugar Film) wants to know.

Written as a letter to his four-year-old daughter, instead of focusing on the path we’re on now, he wants to look at how embracing the best environmental practices would change the world. From stopping deforestation to ending the reliance on fossil fuels, Gameau lays out a plan on how these solutions could regenerate the world for younger generations.