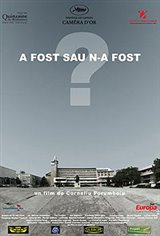 16 years after the Revolution and just days before Christmas, a local television station in Bucharest has invited several guests to share their moments of glory, as they allegedly stormed city hall, chanting "down with Ceasescu!," before Romanian dictator Nicolae Ceausescu and his wife fled the presidential palace by helicopter so many years ago.

An alcoholic history teacher and a lonely retiree, who moonlights as Santa, are forced to answer questions from dubious viewers who aren’t overly convinced that the Revolution ever took place in their city.