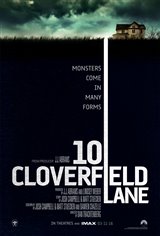 A young woman (Mary Elizabeth Winstead) wakes up in a cellar after suffering a severe car accident. The man (John Goodman) who claims to have rescued her enters the scene and informs her that a catastrophic chemical attack has left the outside world uninhabitable. She harbors her doubts, however, and eventually musters the courage to escape, despite whatever dangers may lurk beyond the cellar walls.

Not a direct sequel to 2008's Cloverfield, the film is dubbed "a blood relative" of the thriller.