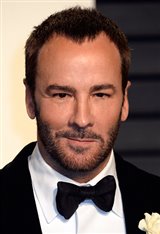 Tom is best known for his work as a fashion designer and is credited with reviving the fashion houses of Gucci and Yves Saint Laurent through influential collections and provocative advertising campaigns that turned Gucci Group into one of the largest and most profitable luxury fashion conglomerates in the world. In 2004, Tom left Gucci Group and founded his film production company, FADE TO BLACK, as well as his eponymous fashion company in 2005. Tom Ford's success in the fashion industry has been recognized by numerous awards including: five awards from the prestigious Council of Fashion Designers of America [CFDA], five VH-1/Vogue Fashion Awards and the Fashion Design Achievement Award at the Cooper Hewitt Design Museum's National Design Awards. In March 2007, Tom was honored with the Vito Russo Award from GLAAD.

He made his feature film directorial debut with A Single Man (2009), starring Colin Firth. The film received a Queer Lion at the 2009 Venice Film Festival, as well as several other awards, including Movie of the Year at the 2009 AFI Awards.

His second feature film, the thriller Nocturnal Animals (2016), received much critical acclaim, as well as numerous awards, including the Grand Jury Prize/Silver Lion at the 2016 Cannes Film Festival. Starring Amy Adams and Jake Gyllenhaal, it also received three Golden Globe nominations (and won one) as well as an Oscar nomination.

Tom divides his time between London and Los Angeles.