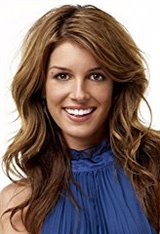 Shenae Grimes grew up in the posh Forest Hill neighborhood of Toronto, Ontario. She landed her first TV job in 2004 with a recurring role on the popular Canadian series, Degrassi: The Next Generation, played Darcy Edwards.

By 2005, not only had her role been upgraded to a starring one, but she was also cast in a recurring role on the second season of the Family Channel series Naturally, Sadie as the mean girl, Arden Alcott, for two seasons until the series ended.

While still on Degrassi, she also played a teenage Shania Twain in the 2005 TV documentary Biography - Shania Twain and in the subsequent TV movie, Shania: A Life in Eight Albums (2005).

When her role on Degrassi came to an end in 2008, she was immediately cast on the U.S. TV series, 90210, playing Annie Wilson. She would move to the States and stayed with the show for all five seasons.

Since then, Shenae has starred in a number of TV movies, as well as the independent Canadian thriller Blood Honey (2017), in which she plays Jenibel Heath, a young woman who finds herself in danger when she returns home to her family's secluded island.