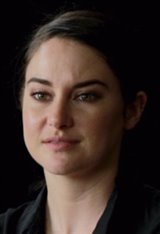 Despite her young age, Shailene Woodley is a showbiz veteran, having made a name for herself on screens both big and small. Born in Simi Valley, California to a school counselor mother and school principal father, Shailene entered the world of acting at the age of five. By the time she was nine, she had recurring roles in two TV series: Crossing Jordan and The District. Two year later she was playing Kaitlin Cooper on the popular series The O.C. and by the time she was 12, she had a starring... See All