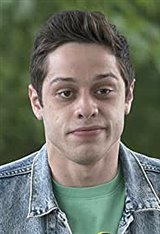 Pete Davidson was born in Staten Island, New York. When he was seven, his father died in the September 11 attacks. Davidson's father was a New York City firefighter and was last seen running up the stairs of the Marriott World Trade Center just before it collapsed. This loss profoundly affected Pete, causing him to act out in school and have suicidal thoughts. He turned to stand-up comedy when his friends dared him to take the stage at a Staten Island bowling alley. This wasn't his original plan... See All