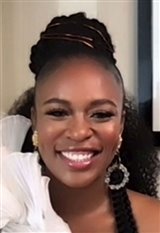 Nomzamo Mbatha is a South African actress, TV personality, model, accountant, human rights activist, and an entrepreneur. She is best known for her work in the South African drama Isibaya (2012-2020).

Nomzamo was born in KwaMashu, Durban. She attended the University of Cape Town, where she studied towards a degree in Bachelor of Commerce with a specialization in accounting. She graduated in 2018.

Nomzamo stepped into the light of the media in 2012 when she became a finalist in the MTV Base VJ Search. Although she didn't win, she did make a name for herself in the media industry in South Africa, and became well known amongst audiences there.

In 2012, Nomzamo was cast to play Thandeka in Isibaya. Nomzamo's portrayal of Thandeka made her one of South Africa’s most popular actresses. As one of the founding cast members, her run in the show lasted for seven seasons until her character was killed off by Menzi Ngubane's character, Judas. Her last appearance in the show was on March 2, 2020.

In 2015, she was cast to play Moratiwa in the South African rom-com Tell Me Sweet Something (2015). Her portrayal of Moratiwa earned her a nomination for the Africa Movie Academy Award for Best Actress in a Leading Role.

Most recently, she appeared in Coming 2 America (2021), starring Eddie Murphy and Arsenio Hall. She played Mirembe, who is tasked with getting the new prince ready for his role in the court of Zamunda.

Nomzamo became an ambassador for Neutrogena in 2015, making her the first South African to be the face of the product. Other products and companies she is partners with include L'Oreal Paris, McDonald's, Puma, and Audi.

Outside of acting and other media work, Nomzamo has been involved with charity work and humanitarian projects in Africa. In 2017 she was appointed to be a High-Profile Supporter for the LuQuLuQu campaign, which led her to be chosen to be a Goodwill Ambassador at the United Nations Refugee Agency in 2019. In addition, she is an honorary member of the Golden Key International Honour Society.

Nomzamo is also the founder of the Nomzamo Lighthouse Foundation, a non-profit organization focused on supporting marginalized youth, child-headed homes and senior citizens.