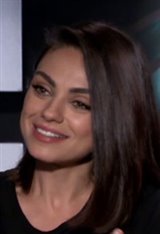 Ukrainian-born actress Mila Kunis moved to Los Angeles with her family when she was seven. Two years later, Mila started studying acting at the Beverly Hills Studio, where she was discovered by her manager. She started her entertainment career by landing several television commercials and is best known for her roles on two of the Fox Network's most successful shows: as Jackie Burkhart in That 70's Show, for which she earned two YoungStar Awards for Best Actress in a Television Series, and as the... See All