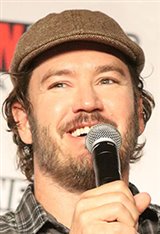 Born to Dutch parents Hans and Paula, Mark-Paul is the only one of the couple's four children to be born in America, Panorama City, California, to be exact.

Gosselaar has also done a lot of other TV work in such movies as Dying to Belong, Brothers of the Frontier and Born Into Exile.

He married Catriona McGinn in 2012. They have two children together. He also has two children from his first marriage to Lisa Anne Russell, which lasted from 1996 to 2011.