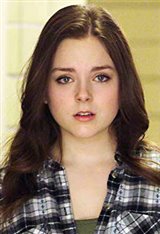 Born in San Antonio, Texas, Madison Davenport has spent the majority of her career on television. With guest parts on everything from Numb3rs, CSI and Bones to ER and House, she has also appeared in a large number of TV movies including While the Children Sleep and Dad's Home, in preparation for her move to the big screen.

Madison has also gained a following by lending her voice to animated family flicks including Over the Hedge (2006) with Bruce Willis, Steve Carell and Wanda Sykes, Dr. Seuss' Horton Hears a Who! (2008) with Jim Carrey and Seth Rogen, and the English version of Ponyo (2008) with Cate Blanchett, Matt Damon and Liam Neeson. Her most important voice work though, was in Christmas Is Here Again (2007) alongside Jay Leno and Kathy Bates, a performance that earned her an Annie Award nomination.

A natural blonde, she dyed her hair brown to play Ruthie Smithens in Kit Kittredge: An American Girl with a star-studded cast that included the likes of Abigail Breslin, Chris O'Donnell, Max Thieriot, Joan Cusack and Stanley Tucci. Her performance gained her significant notoriety, leading to a Young Artist Award win. She went on to play Mary Beth Graber in the TV movie Amish Grace, which won an Award of Excellence and an Award of Merit at the Accolade competition.

From 2011 to 2012 she played a regular role as Ethel on Showtime's hit series Shameless, alongside William H. Macy and Emmy Rossum.

On the big screen, she appeared in the dramatic thriller The Possession (2012) with Jeffrey Dean Morgan and Kyra Sedgwick, and in the Bible-based Noah (2014) alongside Russell Crowe, as well as the comedy Sisters (2015), starring Tina Fey and Amy Poehler.

Additionally, she played Kate Fuller on From Dusk Till Dawn: The Series (2014-2016) and played Ashley Wheeler on the set of the 2018 HBO miniseries Sharp Objects, which received multiple nominations at the Golden Globes and Emmy Awards. Most recently, she played Meredith on Hulu's revenge series, Reprisal (2019).