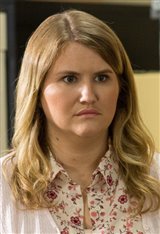 Born in Las Vegas, Nevada, comedian/actress/writer Jillian Bell began studying improv at the early age of eight shortly after she was kicked out of ballet school. While in high school, she started her own improv team and was voted "Most Likely to be Famous." After graduating in 2002, she moved to Los Angeles and became a member of the improv group The Groundlings. In 2009, Jillian auditioned for Saturday Night Live, a lifelong dream of hers, and although she did not join the cast, she was hired... See All