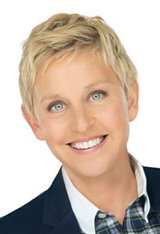 Daytime television would lack laughter and dancing had Ellen DeGeneres focused her efforts on pursuing her initial goal of becoming a veterinarian. Luckily for her enthusiastic fans, however, Ellen found her comedic streak and has been entertaining audiences for decades.

Born in Metairie, Louisiana, Ellen owes her career in comedy to a case of stage fright. While delivering a speech at a public event, Ellen was struck by nerves and resorted to humor as a coping mechanism. She had the crowd in fits of laughter and the offers for stand-up gigs began pouring in. She performed her first routine in 1981.

Ellen broke into Hollywood in 1986 when she caught the attention of a booking agent for The Tonight Show starring Johnny Carson. This led to her invitation to sit on the famed couch during one of Johnny Carson’s recordings, making her the first female comic to earn this distinction.

Appearances on popular talk shows became frequent for DeEllen Generes, who performed on The Tonight Show with Jay Leno, The Late Show with David Letterman and The Oprah Winfrey Show, among others.

Her knack for humor garnered Ellen the title role on the prime-time sitcom series Ellen in 1994, playing a character called Ellen Morgan. The ABC program made history in 1997 when Ellen's character became the first lead performer on television to come out as homosexual. The bold move was applauded by many but it also elicited criticism. Despite her Golden Globe and Emmy nominations, the program was canceled in 1998.

Ellen had already made her foray into feature films with Coneheads in 1993. She followed that by starring opposite Bill Pullman in Mr. Wrong (1996) and alongside Patricia Arquette and Dermot Mulroney in Goodbye Lover (1998).

Ellen tried her hand at sitcoms again in 2001 with The Ellen Show, in which she played a character named Ellen Richmond, who moves from the big city back to her quiet hometown. Unfortunately, the show was cancelled after 13 episodes due to poor ratings, leaving five episodes unseen. It wasn’t until 2003 that Ellen's star quality began to sparkle. She made an epic return to television with her self-titled daytime talk show, The Ellen DeGeneres Show, which to date has been nominated for and honored with several awards. The year 2003 was also when she contributed her voice to the Disney-Pixar hit film Finding Nemo.

Ellen's cheerful and charismatic personality have secured her hosting gigs for the Grammys (1996 and 1997), the Emmys (2001 and 2005) and the Oscars (2007 and 2014). Her jovial nature also resulted in her selection as a judge for the 2009 season of American Idol. She was a very positive judge and hated criticising contestants, which led her to leave after only one season because she found it difficult to be hard on the aspiring talent.

After a high-profile relationship with actress Anne Heche ended in 2000, Ellen became romantically involved with actress Portia de Rossi in 2004. The couple married in 2008 and currently reside in Santa Barbara, California.

The Ellen DeGeneres Show celebrated its 2,000th episode in November 2015. In 2016, Ellen returned to voice the role of Dory in Finding Dory, the sequel to Finding Nemo (2003).