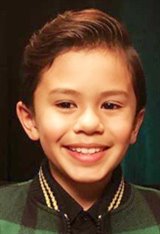 Deric McCabe began acting when he was a small boy. Of Filipino descent, he was born in Whitefish, Montana, but moved with his family to Los Angeles when he was just a year old. By the time he was six, he'd appeared in the short film XXIII Boss (2016). An uncredited role as a "moppet" in the horror film Stephanie (2017) was followed by a larger role in the drama Hold On (2017). However, it was when he was cast in the lead role of Charles Wallace in the Disney blockbuster A Wrinkle in Time (2018),... See All