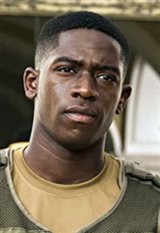 Of Nigerian descent, Damson Idris was born in Packham, London. As the youngest of six siblings, he was raised by his single mother. Growing up, Idris was a big soccer fan and played both rugby and soccer, hoping to become the next Christiano Ronaldo. It wasn't until he was accepted to Brunel University London that he decided to pursue acting. One of his favorite movies growing up was American Pie (1999), so the university experience was always something he wanted. At university, Damson met... See All