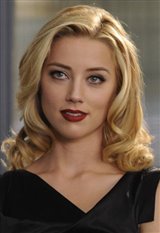 Amber Heard’s interest in a life of stardom began at a young and tender age. Born in Austin, Texas, as a teenager Amber performed in various school productions and took on local commercial roles. At the age of 16, when her best friend died in a car accident, she decided to turn her back on her Catholic upbringing and become agnostic. Dropping out of high school at the age of 17, Amber moved to New York City to try her hand at modelling and less than a year later, moved to Los Angeles to start a... See All