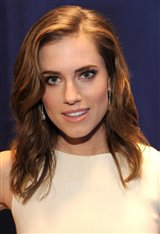 Allison Williams' breakthrough role on television in HBO's hit series Girls is arguably something many should have predicted. After all, she is the daughter of former NBC anchorman and managing editor Brian Williams and TV producer Jane Gillan Stoddard.

Allison was born in New Canaan, Connecticut. She first appeared on-screen as a teenager when she played the small part of Deborah in two 2004 episodes of the Emmy-winning drama series American Dreams.

Following her debut, she turned her focus to school and in 2010, graduated from Yale with a degree in English.

In 2011, Allison made her return to TV with a starring role as Kate Middleton in the four-episode mini-series Will & Kate: Before Happily Ever After. She also guest-starred in an episode of the comedy series The League, which starred Mark Duplass and Nick Kroll.

It was in 2012 when Allison won the role that would introduce her to the masses. She was cast as Marnie Michaels in Lena Dunham's Emmy- and Golden Globe-winning HBO dramedy series Girls about a group of New York women in their early 20s. The last season of the series aired in 2017, bringing Allison's episode count to 52. For her work as Marnie, Allison received a 2016 Critics' Choice nomination in the Best Supporting Actress in a Comedy Series category.

She spoke to Vogue about the end of the show in February 2017. She shared, "More than anything, it's difficult to picture my adult life without the series. I've been playing Marnie since I graduated from university. It's as if at the age of 22, I stopped maturing and handed over my twenties to this character who experienced them for me — which I was happy to do. I was fine not cycling through boyfriends, apartments, roommates, and a million jobs. I just hope I learned from Marnie's experiences. Otherwise, I'm about to regress from 29 years old back to 22."

To play Marnie, Allison was required to film several sex scenes. In fact, she shot more sex scenes than any other actor on the show. While addressing those sensitive shoots, she said, "Of course, they're awkward...but they are hugely revealing about my character and important for the series thematically. Girls isn't exploitative. It put into fashion the idea that a sex scene can also be a moment of character discovery."

In the same interview, she also called Marnie "really polarizing." She said, "There's nothing interesting about playing a settled character."

A year after Girls first aired, Allison won the minor role of Jillian on three episodes of Mindy Kaling's Emmy-nominated comedy series The Mindy Project. In 2014, she made her feature film debut — College Musical (2014).

She also played the titular part in the live TV musical event Peter Pan Live!. As Peter, Allison proved to have an adequate singing voice, but didn't appear to make any effort at playing a boy, making her Peter not only feminine, but also not a youngster — in fact, her performance was that of an adult woman wearing a short wig. Reviews of the live musical were scathing.

Moving on to the big screen, Allison played Rose, the girlfriend of Daniel Kaluuya's central character in Get Out (2017), Jordan Peele's racially-themed horror film.

During an interview with Harper's Bazaar in November 2015, Allison discussed what a typical day for her entails. She revealed that she wakes up at 9 a.m., does Pilates, enjoys reading and playing with her camera, attends meetings, and as one would expect, acts. She also shared that she is a night owl and normally stays up until 2:30 or 3 a.m., and that she is "the world's worst cook."

While chatting about her fashion sense, she said, "I dress a little like I have multiple children. I'm all about ease and being quick."